If your allies want to support your colony, they can send some of their units here to defend your planet. Don't forget to thank your allies!

This bunker replaces the Friends Bunker in GLPA.

To see detailed info on the total amount of buildings per Base level visit: Building Level Unlocks on Star Base's Page. 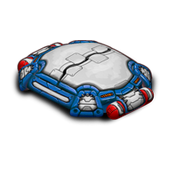 Retrieved from "https://glpocketadventures.fandom.com/wiki/Alliance_Bunker?oldid=16768"
Community content is available under CC-BY-SA unless otherwise noted.